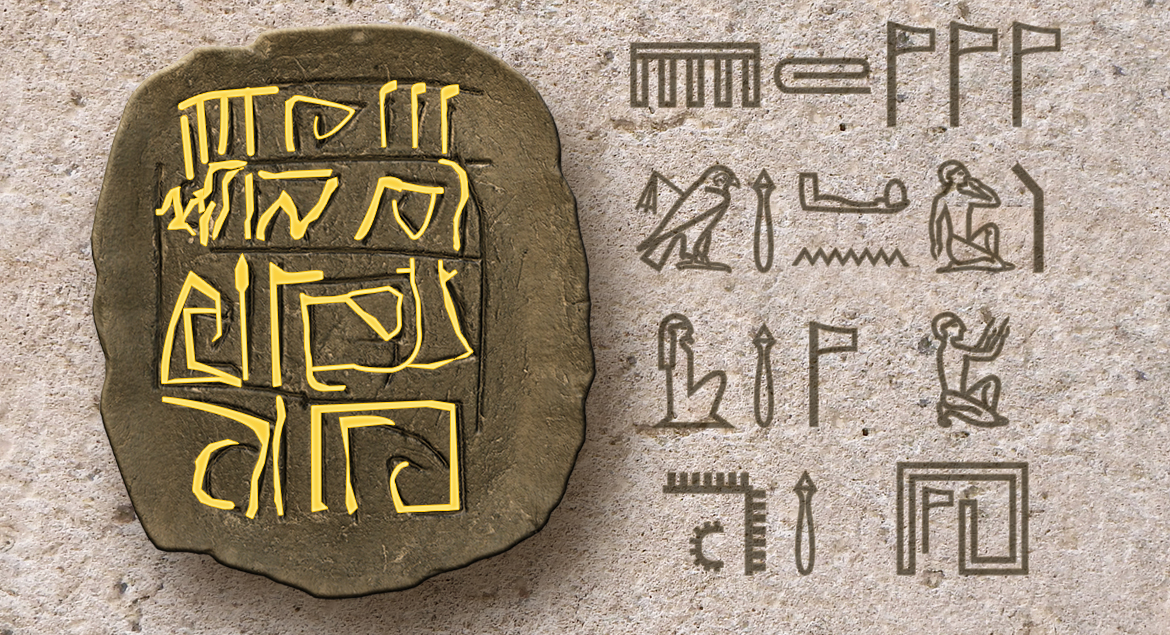 The Votive Tablet from Gradeshnitsa

The Votive Tablet from the village of Gradeshnitsa (Vratsa District, Bulgaria)* (Circa 5000 B. C. E. – the Eneolithic / Chalcolithic Era)

The Tablet from Gradeshnitsa contains 4 rows of pictographic signs, which are quite clearly visible upon the tablet’s photograph (exhibit A). They are presented in a computer enhanced version and in a schematic drawing, respectively in exhibits B and C. (N.B. If there have been any other additional signs on the artifact, that are presently not visible or discernable, these have not been taken into consideration for the purposes of our present reading of the text). The above identified pictographic signs look exactly like the Hieroglyphic Inscription presented as exhibit D, when they are transcribed using the stylized later version of the pictographic script, known to us from the pyramid texts of Ancient Egypt, beautifully rendered here in its computerized calligraphic print.

Upon comparison, it becomes evident that the text displayed on exhibit B, exhibit C and exhibit D, is absolutely one and the same identical text, and that the two calligraphic styles (respectively – the early Thracian, and the late Egyptian), represent one and the same identical pictographic script, which has come to us down the ages in its condition and appearance as seen on Exhibit A.

The evident conclusions are as follows:

The hieroglyphic text upon the Tablet from Gradeshnitsa (as transcribed in Exhibit D) can be read in the right-to-left direction and its translation (following the well-established rules for translating Egyptian hieroglyphic writing) has the following or similar meaning, verse by verse:

The Three-One God (Trinity, or gods) encompasses (dwells in) Thrace, or
O God, who are dwelling in the territory of Thrace

I glorify the Great God, or and I will praise you, O Great God

The Temple of God is a great fortress and a secret defended place, or
O God, who are in your temple, be my fortress and defend me (deliver me from the enemy)!

Or if we are to put the above text into the everyday lingo of our modern time, it would sound something like this:

More detailed information about the Gradeshnitsa Plate and its reading is, of course, found in the First Book of this series – The Thracian Script Decoded – I, where a more thorough analysis of the text of the Votive Plate and its meaning was introduced.

A unique fact about the Gradeshnitsa Plate, which was not mentioned in Book I, but become aparent with Book II, however, deserves some special attention, as it brings further curiosity into the meaning of its textual contents, especially the last row of pictograms that contain the hieroglyphic sign

meaning “Temple (House) of God”; or “God, who is in his Temple”, composed of two hieroglyphs respectively:

meaning “God” and pronounced “Nooty”**, and

, which in the text translates as “Temple” and was pronounced as “Orphei”** / “Erphei” in the north of Egypt and is so preserved in the Boharic Coptic Egyptian dialect used in the Christian Liturgy to this very day! For the English speaking reader this may not ring immediately any bell, but on the Balkans the word “Orphei” is identical with the original pronunciation of the name of the Legendary ORPHEUS who was the Thracian Patriarch equal to what Moses was to the Jews, and several independent of each other ancient traditions attribute to him the foundation of both the ancient Dyonisian Religion and the Orphic Mysteries, as well as the essentials of all ancient Temple-worship, Temple-music and Temple-ritual, that have influenced all religious practices from his time to this very day! No wonder his own personal name became so closely related to the ancient concepts of Temple and Temple Practices that it became synonymous with the ancient word for “Temple” both in the Thracian speech and in the Boharic North-Egyptian dialect which must have been most closely influenced by the Thracian dynasties, who had ruled in the Delta region, as was explained in Book I of this series.

Since the Votive Plate from Gradeshnitsa is the first ancient document, ever mentioning a Covenant with God dating from as early as around 5000 BCE, and since the name of the Temple here is pictographically transcribed as

, pronounced as “Orphei” = “ORPHEUS”, two interesting conclusions may be drawn from the above:

The tablets from Gradeshnitsa and Karanovo, however, are definitely not the only existing artifacts of that nature found on the territory of Ancient Thrace! There are a number of other similar tablets (plates) well known to archaeologists, which date from relatively the same historical period (of 5000 to 4000 BCE) and were found within the borders of the same extended geographical region. Without going into all the technical archaeological details of such finds in this predominantly linguistic research work, it will suffice for us to state, that our analysis conclusively demonstrates, that the tablets found to the north of Gradeshnitsa (Bulgaria) – in the region of Tartaria (modern day Romania), display pictograms of the same Thracian pictographic script, identical to the one already decoded by using the Guide Method, upon the Tablets from Gradeshnitsa and Karanovo (Bulgaria).

* At the time of the First Edition of this book, the original Tablet of Gradeshnitsa was in the keeping of the Vratsa Regional Museum of History, in the city of Vratsa, Bulgaria.
** in the Boharic (North Egyptian Coptic) Dialect

Newer Post The Ark of the Covenant Found in Bulgaria Older Post The Sacred Tablet from Karanovo
We use cookies to ensure that we give you the best experience on our website. If you continue to use this site we will assume that you are happy with it. For further information please check our Privacy Policy Ok